I discovered my love for tabbouleh when we were living back in Brooklyn, and I had unlimited access to some of the very best Middle Eastern food around.  Two of my favorite local spots made versions of it that I loved- one made it with more parsley than bulgher wheat while the other was heavier on the grain.  I loved them both, but decided I wanted to make my own version– inspired by these two, with lots of parsley and, instead of bulgher, lots of quinoa. 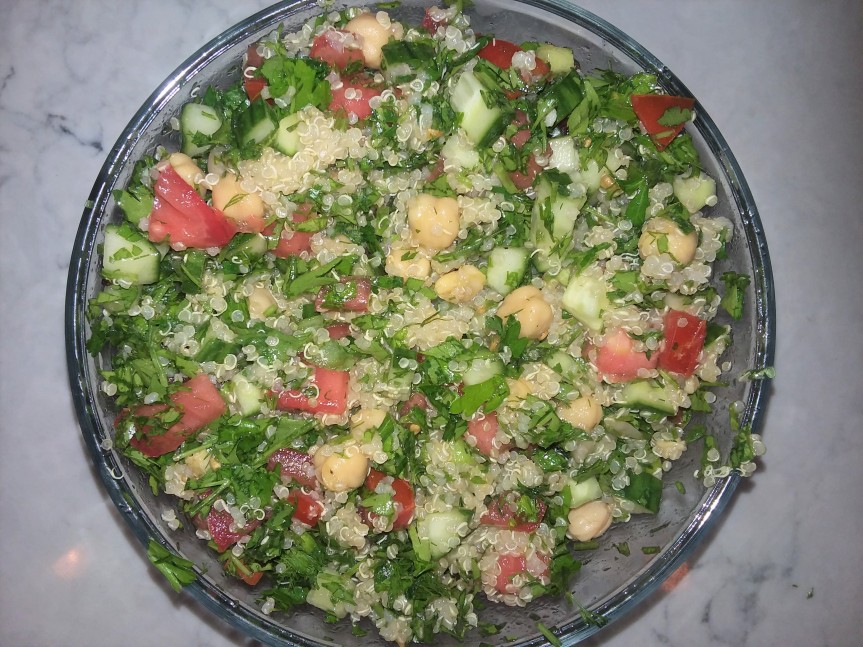 My version still tastes like traditional tabbouleh, heavy on herbs and with a light lemon dressing, but it’s gluten free, higher in protein, and holds up well in the fridge.  I made my batch on a Monday morning, while my big kids were off at camp, using the cucumbers and tomatoes from my local (Dreyer Farms) CSA share, and using the herbs from our own little garden.  It comes together quickly, and for an added dose of protein, I threw in some chick peas.  This made for a light, but filling lunch to bring to the pool for a few days while my youngest learned how to swim!

On a side note: if you happen to live near Union County, New Jersey, you should check out Dreyer Farms. It’s a small, family run operation that offers amazingly fresh, local produce (much of which is grown on site), a staggering amount of plants for your landscaping needs, wine tasting, and some of the best freshly made pies and doughnuts around.

Come and explore some tried and true recipes from a busy mom who loves healthy, delicious food and somehow manages to get it on the dinner table (most nights).